​The biggest challenge that the wildlife faces at Katiki Point is uncontrolled visitors. In the 2014/15 season only half the number of Yellow-eyed penguin chicks were raised per pair here compared to a near-by colony with no visitors. Particularly affected were nests that were within 10m of paths used by visitors. The 2015/16 was better but only because we kept the penguins from crossing the path used by tourists and preventing them from reaching their nest sites. Some pairs relocated but the impact on the pairs constantly exposed to tourists persisted: all three chicks in that area had to be fledged through the rehabilitation facility and two or the four parents had to be assisted through the moult because of the stress of unabated people traffic. We do not expect the conditions to change for the pairs breeding in the area accessed by uncontrolled tourist for the 2016/17 season.

​This page documents how visitors regularly not only break the law by approaching the wildlife too close but deliberately flaunt instructions. They harass penguins and seals in particular and do so with impunity to get the perfect shot on their cell phone. This issue has been repeatedly raised by us with both the Department of Conservation and the land owners, with instructions to allow access 24/7 to the penguins colony by the former and indifference by the latter.
​On 5 June 2015 Penguin Rescue was contacted by tripadvisor that Katiki Lighthouse is the 3rd Top Landmark In New Zealand and number 1 on the South Island.

While some visitors come to Katiki Point to see the lighthouse most of the comments on tripadvisor have to do with the wildlife, and penguins in particular. Comments include that it is not only free but you can do it quickly.  ​

People don't realise that without the work done by Penguin Rescue volunteers, Katiki Point would only have New Zealand fur seals, Black-backed gulls and Spotted shags. A seabird paradise was created at Katiki Point over 30 years and can now boast with the presence of 11 seabird species. Visitors are not only unaware of this but fail to understand that this paradise is in danger of being loved to death as - due to the noisy presence of hundreds of people every week in summer - the penguins had half the breeding success there compared with a colony without visitors (in the 2014/15 season). This is a huge problem for this endangered species and this award will make the problem worse as it will attract even more people. 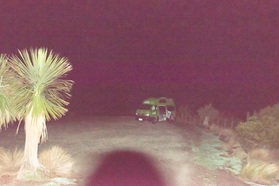 3 September 2016: Despite the clear 'no-camping' sign, the occupants of this camper van still stayed the night. There were others at other times as well: the signs do not appear to deter some people.
In addition there is a big sign at the turn-off to Lighthouse Road with the same message:
We monitor the presence of cars in the carpark after the closing time at 5:30pm by taking a photo every night. Here is three examples from October - most nights there is still someone in the reserve after closing - and we don't record anyone arriving after 7:30pm - but they clearly do and go down into the colony and do as they like - as evidenced in the photos below.
8 October 2016 at 8pm: We were in the penguin colony at 8pm to look for a penguin we were concerned about and found this guy hanging over the fence taking photos in the dark. It was already so dark that even with 6400 ISO the photos are blurry! In the first two photos you can clearly see the penguins he is photographing (they have gone in the last one, scared away) and he is leaning in very close. He later claimed to 'love penguins and wildlife' - hard to believe when his actions were so selfish.

The harassing of penguins continues in 2016

​Spear-fishers leave dog tied up at Katiki Point while fishing
On 27 February 2016 at 10:30am, two volunteers from Penguin Rescue, Rosalie Goldsworthy and Hiltrun Ratz, encountered a dog tied up at the tip of Katiki Point next to a group of people who told them that it was not their dog and that its owners were diving nearby. They that they were there to keep an eye on the dog because they were concerned. The dog had slipped its collar which was then around its waist (see photo 1034am_27Feb16.jpg and 1035_27Feb16.jpg). Rosalie Goldsworthy shouted and gesticulated to the divers to come out of the water which they did. She informed them that it was illegal to have a dog in the reserve. She asked them to take it away and they replied that they would take it away. One of the men commented that it was better to bring the dog and tie it up than to leave it in the car. At 10:45 they arrived back at the car park with the dog and put it in the back of the ute (registration BDK653) and drove away at about 11am.
The police were rung by Rosalie Goldsworthy but the nearest officer was in Oamaru and it would have been impossible for him to catch up with the two men and so Rosalie then asked the police not to pursue the matter. 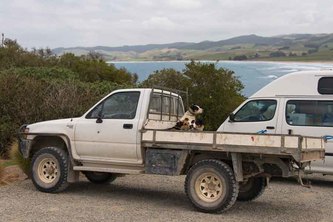 This is not the first time that people come to visit Katiki Point with dogs in tow. It happens regularly. Here is another ute with three dogs tied up on the back from 27 October 2015 at 2:32pm. Most people will tie up their dogs like this or leave them in the car. Having come across the dog within the reserve however shows an outrageous disregard for the wildlife. 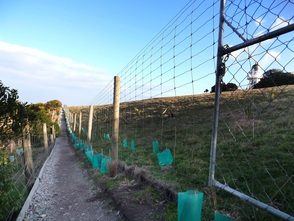 Public walkway with these rocks.
More rocks!
On 24 January 2016 we came across a dozen of these rocks in the Yellow-eyed penguin colony at Katiki Point. They were strewn across an open area of about 20m by 20m used regularly by these penguins. Most are single males that come back to the colony after fishing and display and sing. They are within 30m of the public walkway.
The question is: where do these rocks come from? They don't fly there by themselves. This leaves the uncontrolled tourists that visit Katiki Point every day. They are unsupervised and obviously think it is an ok thing to do throwing rocks into an area where penguins display and live.
We expect this colony which is the largest on the South Island to go extinct within the decade because no protection is put in place to save these fast disappearing penguins. Every tourist has a feeling of entitlement to be there, no one is thinking about the penguins' entitlement to live and breed without being harassed. 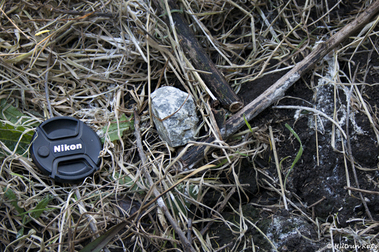 There is a rock in the forest: so what? you may ask.
There is nothing to it until you look closer, look around you and notice a few things:
1. It is quite a big rock - about the size of the lens cap next to it.
2. It has white stuff on it - that is penguin poohs.
3. There are no other rocks like this nearby.
4. There is a path used by people about 50m away and there are two fences between the rock and the path.
So what's the story then? We deduce that the rock was thrown by a tourist from the path where the rock used to be, into the colony - so far into the colony in fact that it reached a spot where penguins regularly sit and roost - hence the poohs. The sad thing is, this is not the only rock - we find them regularly in throwing distance from the path where about 50 000 people walked in the last 12 months.
Unsupervised visitors throw rocks into areas with endangered wildlife - what's the chance they aim at a penguin? at a seal? at a sea gull?           THIS IS NOT RIGHT!

30 June 2015:
A trail camera was placed above the beach near the access point for the Yellow-eyed penguins to monitor the arrival and departure of the penguins. This is what we found on the camera:
The top right photo shows quite clearly the penguin is nervous and distressed by the presence of these men. There is a sign at the entrance to the colony that it closes at 5:30 - from the time stamp on these photos it is evident that these men were here after closing time. The photos below show in day time where they had to jump the fence and the red circle shows where they must have been standing for these photos to be taken.
The bottom left photo was taken without the interference of people: the penguins are milling about doing their thing without being stressed by intruders. That is how it should be for them!
The trespassing continues. The camera has picked up another 2 people who jumped the fence and went into the area where the penguins come ashore.
This is what people do when they are unsupervised around endangered wildlife. They can only be there after jumping barb-wired fences: 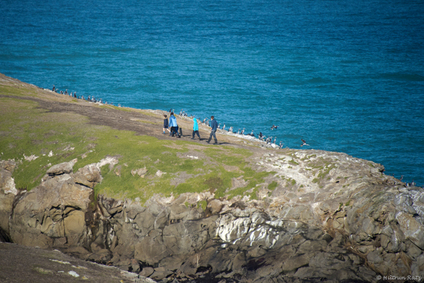 On the same day we observed a family crossing over to the island at the tip of the Moeraki peninsula and walking within 2-3m of roosting Spotted shags - again oblivious to the fact that they were breaking the law by approached protected wildlife so close. 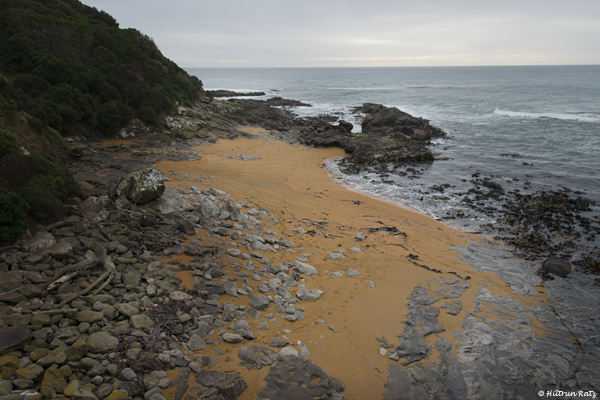 17 May 2015
We found human footprints on the penguin beach this day. Someone had climbed the fence early in the morning and walked along the foreshore just when the penguins were trying to leave for fishing. 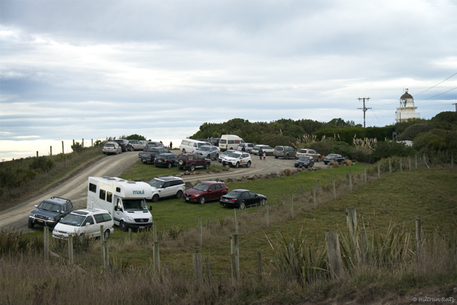 25 April 2015
Even this late in the season the car park at the Katiki Point lighthouse was overflowing with cars at 6pm. The onslaught of visitors was unrelenting this summer.
14 February 2015
The left photo was taken at 6pm: a overflowing car park at the Katiki Point lighthouse. In the penguin colony (below right) visitors literally hang over the fence to take photos of an adult Yellow-eyed penguin that has just returned from fishing and wants to feed its chick. The overbearing presence of the visitors keep the adult from doing this.

18 January 2015
Here is a guy who is within 2m of two adult Yellow-eyed penguins taking photos. This is illegal and he did not give a damn. 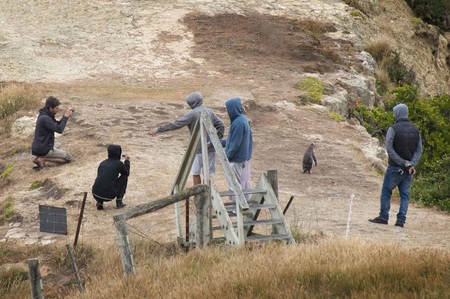 11 January 2015
It is the middle of the breeding season and many people visit Katiki Point. The penguins are busy raising their chicks. Here a group of visitors not only has surrounded the penguin but have pinned it against a cliff drop leaving it no where to go. Two of the five people are not even looking at the penguin they are harassing but elsewhere. 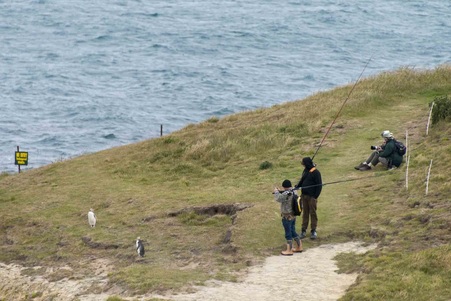 3 December 2014
Here passing fishermen approach a loafing Yellow-eyed penguin adult on their way back from fishing to take some photos on their cell phone - again oblivious to the fact that they are closer than 5m from the bird and are therefore breaking the law. They even approached the penguin until it walked away further. At least the other two people in the photo were respectful and enjoyed the company of the penguins from a good distance and limited their size by sitting down.
18 October 2014
We were on our round to check the nests of the breeding Yellow-eyed penguins at the Katiki Point Reserve when we came across the young man inside the boundary fence. He was crashing about within meters of incubating penguins and laughed and thought it a joke that we had caught him inside the fence. We don't know how he managed to get there but assumed that he had climbed out of the hide window. He left laughing and giggling with his friends. 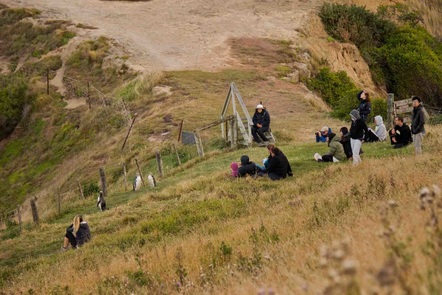 26 June 2014
Typical evening scene at Katiki Point: people are surrounding penguins that are on their way home from the beach (on the left in the photo) to their homes (on the right of the photo). While it is good to see some people taking the trouble of crouching down to make themselves smaller, the penguins are still crowded and unable to go where they want to go.