Description of the species:

Recent research has overturned some long-held beliefs about the mono-generic status of Yellow-eyed penguins. A combined analysis of ancient and modern DNA and ancient and modern penguin bone structure revealed the presence on the New Zealand South Island of a a sister species Megadyptes waitaha. Up until about 1500 AD Yellow-eyed penguins were restricted to Auckland and Campbell Island groups, while the mainland was occupied by M. waitaha. It is thought to that M. waitaha was harvested to extinction and that its disappearance opened the way for straggler Yellow-eyed penguins from the sub-antarctic  to gain a  foothold on the mainland, where a change in harvest patterns by humans and a loss of large marine mammals allowed them to rapidly expand into the population we see today. The endemic Yellow-eyed penguin is now the only extant member of the genus Megadyptes remaining in and restricted to the New Zealand region. 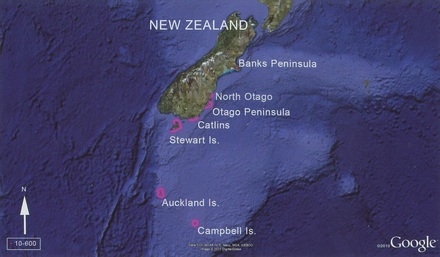 Distribution of Yellow-eyed penguins
Yellow-eyed penguins breed on the southeast coast of New Zealand's South Island (mainland), on Stewart Island and adjacent islands, and in the sub-antarctic on Auckland and Campbell Islands.
On the New Zealand mainland they  breed in four distinct breeding regions: the Catlins, Otago Peninsula, North Otago and Banks Peninsula.
On Stewart Island they breed along the northeastern and eastern shores, as well as on a range of island outliers, most importantly Codfish Island, around the exit of Paterson Inlet including Bench Island and further south in Port Pegasus.
Management of this species has proceeded as if it exists as one large management unit, stretching from Banks Peninsula to Campbell Island. Band recoveries indicated very little or no movement between the sub-Antarctic and mainland populations, or from north to south. Early genetic studies showed genetic separation between the South Island and Auckland and Campbell Islands.
More recent analysis revealed two genetically and geographically distinct populations: the South Island (including Stewart Island) and the sub-Antarctic confirming that there is no signifiant migration of Yellow-eyed penguins between the sub-Antarctic and mainland New Zealand and that these populations should be managed as separate units.

This species is listed as Endangered because it is confined to a very small range when breeding, in which its forest/scrub habitat has declined in quality. Its population has undergone extreme fluctuations and is now thought to be in overall decline (year published: 2012 and assessed by BirdLife International).

The present-day distribution of Yellow-eyed penguin breeding sites corresponds to the pre-European distribution of cool coastal hardwood forest. Currently, breeding occurs in mature coastal forest, regenerating coastal scrub, but also in pasture, windbreaks of planted exotic trees, and relatively exposed cliffs. Access to breeding and loafing sites may be via sandy or pebble/rocky breaches, or rocky platforms. The majority of nests are sufficiently spaced among dense vegetation to be visually isolated.
Yellow-eyed penguins select well-concealed nest sites under dense vegetation with both sexes contribution to nest building. The nest itself is an open shallow bowl made of twigs, grass, and leaves. Most birds return to the same general nest area each year.  Several nest sites can be occupied before laying and nest sites can be different from year to year or be retained for up to seven successive seasons. Nearly three-quarters of breeding pairs remain together for more than one season, with divorce the cause of about 13% of pair bond changes. 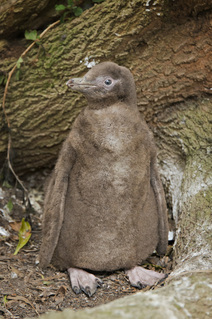 6 week old chick
Accident, predation and starvation are the major causes of chick death and disease may also be a concern. Early deaths are usually accidental, such as when small chicks are crushed, or can be due to the failure of the parents to feed the chicks. Chicks are most likely to be killed by predators between 5 and 20 days after hatching but remain vulnerable until 40-50 days after hatching. Starvation is uncommon but may occur after 9 weeks. When food availability was sufficiently poor to result in starvation of chicks both chicks lost weight at similar rates and no brood reduction mechanisms were evident. Fledging of chicks occurs after about 106 days. Little is known about the movements of newly fledged juveniles other than that in most years they move north and may spend most of the winter at sea, although in good foo years, they will remain in the vicinity of their natural area and can be seen onshore from time to time.
Additional note from Penguin Rescue: The chicks are about adult size aged 8 weeks and are still covered in down feathers. They are slowly replaced starting with the insides of the flippers and tail feathers. The belly is finished and white before the back has turned blue and last is the neck and head. The chicks are usually down-free by three months but stay for another 2 weeks being fed by the parents. They will require about 1kg of fish a day. For more information about breeding success at the colonies cared for by Penguin Rescue, please go to the Advocacy and reports page for our annual reports. 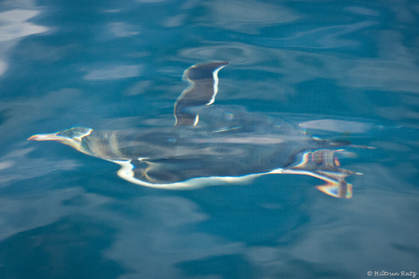 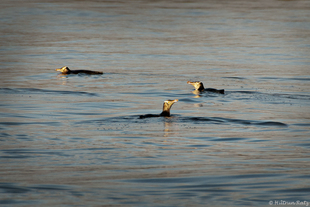 Three adult Yellow-eyed penguins out fishing
Most Yellow-eyed penguins forage in the mid-shelf region between 2 and 25km offshore, diving to depths of up to 40-120m to obtain bottom-dwelling fish species. Breeding Yellow-eyed penguins make two kinds of foraging trips: day trips that ranged between 12 and 20km from the coast and shorter evening trips of less than 7km. Diving behaviour is mainly benthic. While foraging trips are very consistent, considerable inter-individual variation exists in how far offshore birds feed: most are mid-shelf foragers while others are active >16km from the coast. Failed breeders and nonbreeders travelled farther and longer than breeding birds. 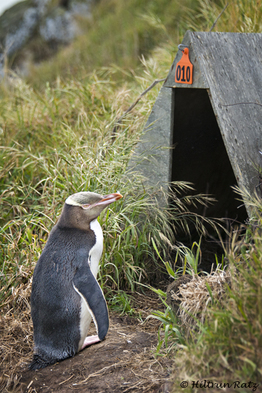 At the colonies cared for by Penguin Rescue, nest boxes have been used to create instant nesting opportunity for the penguins. These are still popular despite the mature forest now also available.
Terrestrial threats:
On land, habitat degradation has the greatest impact on the species. Breeding habitat changes and loss and fragmentation of habitat reduces reproductive success through predation, disease, human disturbance, heat stress and hypothermia if chicks get wet.
Loss of mature coast forest may be responsible for historic declines in Yellow-eyed penguin populations and may force penguins to nest in possibly sub-optimal habitats, where they may face greater heat stress on land during breeding. However, there is evidence that penguins are able to breed and fledge chicks in even very modified pasture habitats. The effects of predation were thought to be ameliorated (but not eliminated) through the creation of areas of rank vegetation that could support fewer rabbits (primary prey of cats, ferrets, and stoats) and hinder access o these predators into and through penguin breeding sites. Quantification of predator movement and the relative abundance of predators and prey do not support this "vegetation buffer"  hypotheses. The evidence suggests buffer zones may attract predators, possibly through increased abundance of the prey species such as mice and small bids. Inadequately controlled dogs continue to cause problems on penguin landing beaches. 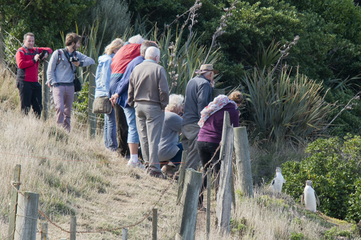 Human disturbance is a huge issue at Katiki Point. Here a group of tourists tower over an adult that has just returned from fishing and is trying to feed its chicks. The 40 000- 50 000 uncontrolled visitors to Katiki Point caused over 50% mortality of chicks less than 2 weeks old in the 2014/15 season. For more information see our human disturbance page and annual report.
Human disturbance
This species is vulnerable to disturbance by humans, including tourists, researchers and managers. Available evidence suggests that carefully regulated tourist viewing of penguins does not carry measurable impact. However, unregulated and relatively high intensity disturbance by tourists is associated with reduced breeding success and lower chick weights at fledging, which results in lower first-year survival and recruitment probabilities. Contrary to what could be expected, birds that continued to breed despite frequent disturbance do not habituate to human proximity but appear to be sensitized and show stronger heart rate and hormonal stress responses to human disturbance. Hence, penguins exposed to unregulated tourism are not only disturbed more often, each disturbance event is more costly for the affected birds and disturbance effects accumulate, potentially leading to poorer breeding performance. 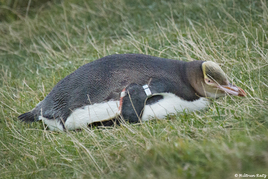